Do you deep sniff? Once or twice? Whether you knew it or not, poppers have been around for all of your life. We may be dating ourselves, but even a few of the BB Team learned a thing or two about VHS head cleaners back in the day. That’s an eon ago.

Adam Zmith (with a Z even though autocorrect really wants an S), an award-winning writer and podcaster, recently researched the history of poppers in gay culture. Zmith’s new book, Deep Sniff: A History of Poppers and Queer Futures, traces amyl nitrite, or poppers, history from the 1840s to the present day. In Deep Sniff, what starts as a thoughtful inquiry into poppers becomes a manifesto for pleasure.

French chemist Antoine Jérôme Balard synthesized amyl nitrite in 1844. In the 1860s Scottish scientist Thomas Lauder Brunton popularized amyl nitrite to treat patients for angina. Amyl nitrite started being prescribed in glass ampoules. Patients would crush the ampoules with cloth sleeves, which made a popping sound, and inhale the fumes. The colloquialism poppers was born!

In Pink News writer Patrick Kelleher‘s article, “The Extraordinary Story of How Poppers Became a Cornerstone of Gay Culture,” he indicates that “according to Zmith, it’s ‘impossible to pinpoint exactly when amyl nitrite became a recreational drug’ – but research indicates that queer men started using them to relax their sphincters in the 1960s.”

By the 1960s the US FDA had removed the prescription requirement. “But by the end of the decade, following reports that young, healthy men were misusing the substance, the requirement for a prescription was reintroduced.”

“It was after the FDA reintroduced its prescription requirement that capitalism swooped in to save the day. Recognising that there was demand, entrepreneurs started modifying amyl nitrite slightly so they could sell it legally in small bottles designed for sniffing. In a bid to appeal to the gay community, manufacturers started marketing their products with pictures of hulking, muscular men riding motorbikes and dressed in leather.”

Poppers became legally described room deodorizers, finger nail polish, and VHS video head cleaners. (The BB Team really used Q-tips to clean our heads, and the smell was intoxicating. If you’re too young to know what VHS was, ask your parents LOL).

A remarkable addition to queer history.

HUGH RYAN, AUTHOR OF WHEN BROOKLYN WAS QUEER

This magical ‘room deodorizer’ truly opens portals to new, if not fragrant, dimensions. Knowledgeable and naughty, Deep Sniff is a giddy, unashamed rush.

Deep Sniff was recently included on the Polari Prize First Book Prize Longlist 2022, UK awards for emerging and established LGBTQ+ literary talent. The paperback is published by Repeater Books in the UK, and available at Barnes & Noble in the US.

Note that in the present day, while poppers are legal in the US and UK, there are many countries where poppers are illegal, such as Canada. The BB Team suggests you think twice (we forgot) before throwing the little liquid bottle in your quart-sized toiletries bag and traveling abroad. 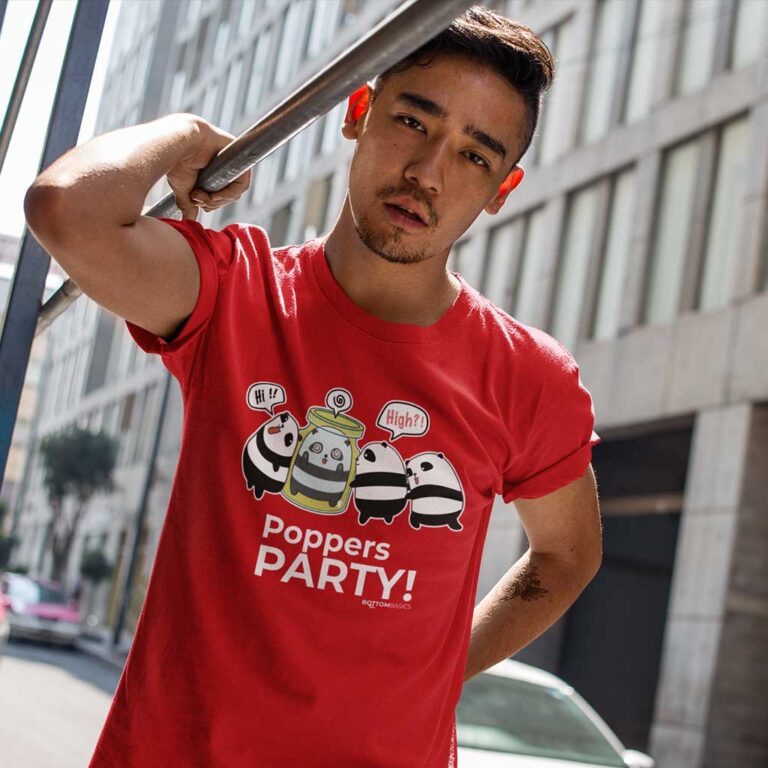 PANDA POP PARTY T-SHIRT
Panda Pop Party T-Shirt
Hi! Someone's always the life of the party! You know who you are. Our t-shirt is uber ``Popperlar!`` and as a special limited edition, it's selling fast!
SNATCH T-SHIRT